Come, sit with me and let’s drink tea! – the shopkeeper exclaims as he ushers you through a labyrinth of rugs. Sure, you’re grumbling under your breath thinking this is just another ploy to get you to buy something, but for Moroccans, drinking tea is a way of life. Every culture has its own way of relaxing and showing hospitality. For the Italians, a glass of wine with dinner is a must. In the United States, sitting in the backyard and sipping beer is a great way to relaxing and catch up. In Ethiopia, taking part in a coffee making ceremony is a way of being welcomed into your host’s inner circle. In Morocco, drinking tea together is an invitation to witness and participate in an important part of the culture. 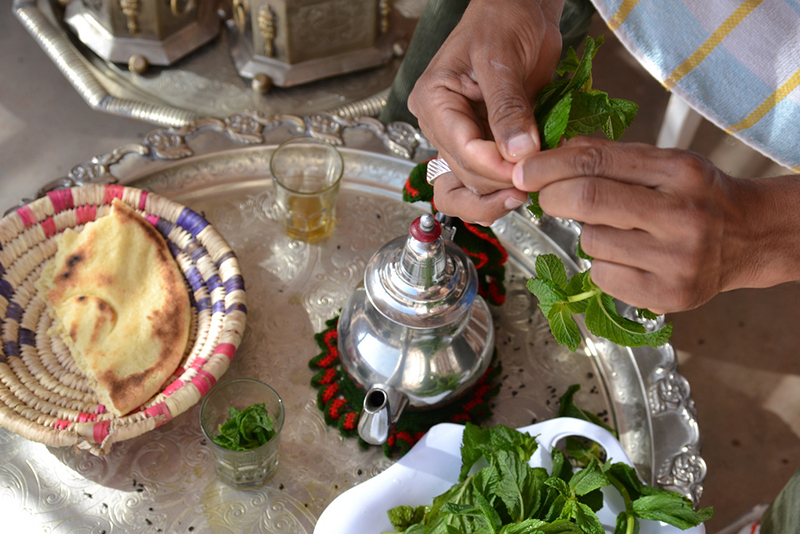 Ask any Moroccan how many cups of tea a day they drink and you may be surprised by the answer. It could be as few as three or it could be upwards of ten! When you visit a Moroccan’s house, the first thing they will do is start brewing tea. A typical breakfast might consist of a cup of tea and bread drizzled with olive oil. Tea is served after lunch, in the early evening for “snack” time, and maybe later in the evening before bedtime too. Of course, if someone pops in for a visit, the host will brew an extra pot to drink together, that is if there isn’t one already brewing. As temperatures drop in winter months, tea consumption goes up and it’s not uncommon to see teapots being nursed on burners all day long. But the Moroccan tea ritual is not as simple as boiling water and dunking tea bags. No, not at all. Making Moroccan tea is an art and a skill that is learned over time. 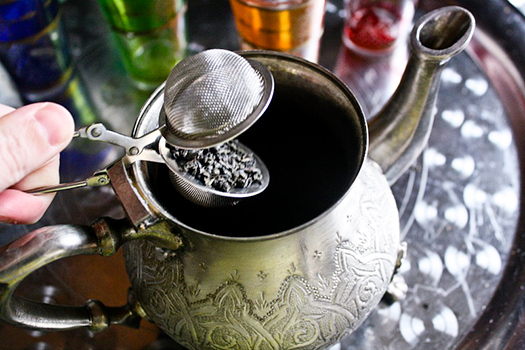 The most typical type of tea served in Morocco is green tea, specifically Chinese gunpowder tea. It’s brewed with fresh mint and plenty of sugar. The level of sugar will vary by location; those in the South tend to drink much sweeter tea. You can request Moroccan tea without sugar but be prepared to get some strange looks. You also may discover that it just doesn’t taste as good without a bit of sugar mixed in. How you take your tea is up to you, but Moroccan tea is always served with sugar brewed in it, so if you don’t want any, make sure to voice your request ahead of time.

Moroccan tea starts with adding water and loose tea leaves directly into a tea kettle. The kettle is set onto a gas burner until it boils. At that point, fresh mint and sugar is stuffed into the pot and left to steep for about five minutes. Some people heat the water up again while the mint and sugar steep, while others prefer to let it sit untouched. Once the steeping is complete, the first glass is poured and the ritual begins. 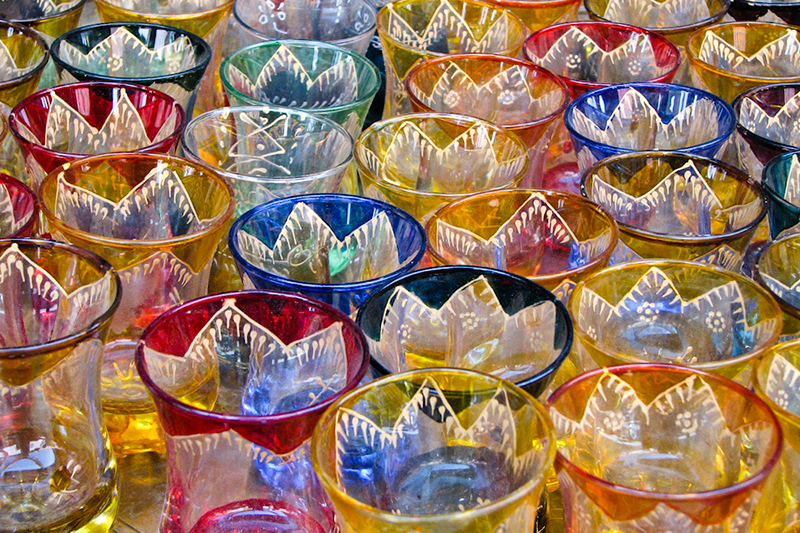 Colorful Moroccan tea glasses. Photo by Omer Simkha under CC, adapted by ParTASTE
If you take part in Moroccan tea time, you will most likely notice two things: the tea is poured from very high up and an extra glass is also poured. There are a variety of stories explaining these traditions. One version is that in order to assess how good the tea is, it must be poured from high enough to create foam at the top of the glass. If there’s no foam, than the tea is bad and you should start over. You also may notice that the first cup of tea is only poured about half way full. It’s then left to sit for a few moments. A second cup is also poured. The first cup is poured back into the pot while the second cup is discarded. The reasoning for discarding the second cup of tea is a claim that there are toxins released when pouring it. Those who pour the tea back into the top of the pot do so as a way of removing some of the bitterness that may be found in the first glass or two – a way to help circulate the flavors. 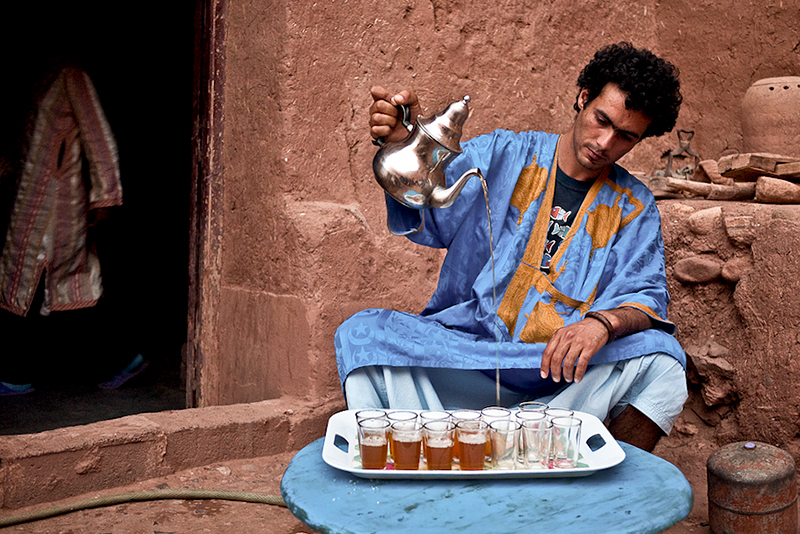 The art of Moroccan tea pouring. Photo by Cliff Williams via CC
The first cups of tea served can be a bit strong. As soon as they’re poured, it’s not uncommon to refill the pot, add more mint (but not more tea) and boil the liquid again. This second brewing of tea will be lighter, sweeter and infused with more mint flavor. In some locations, like the Sahara, a third pot of tea will also be brewed from the same initial pot. Drinking tea in Morocco is not something that is done on-the-go or in a hurry; it’s meant to be savored and enjoyed slowly. 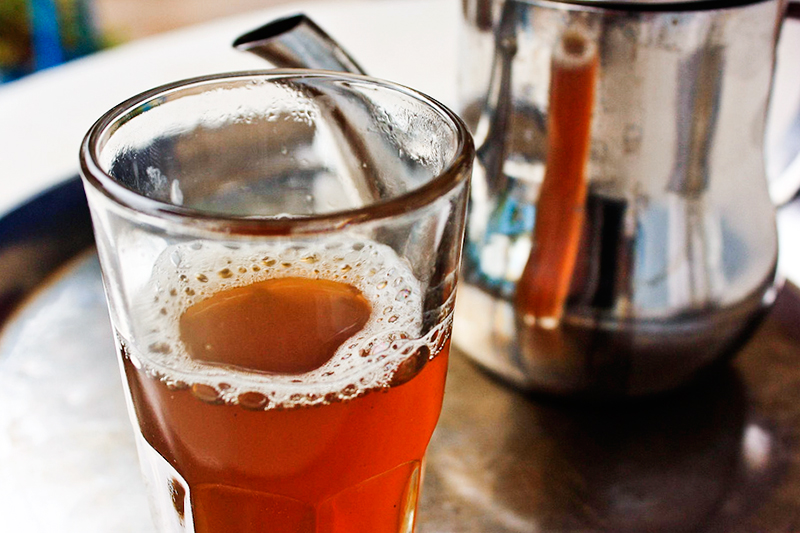 Photo by Evan Bench via CC
When the tea is truly ready to drink, the host or hostess will fill small glass cups from high above in a dramatic show, leaving plenty of bubbles on top of each. Half the fun of drinking tea in Morocco is to see from how high up the glasses can be poured! It’s easy to get caught up in the spectacle of things, but be careful when you drink your tea as the glass is usually very hot. A good trick is to place your thumb on the top rim of the glass and bend your index finger to a slight curve. Set the bottom rim on the curve to support the glass. You can also hold the top rim where there’s no liquid with your thumb and index finger. Sip your tea slowly – its best when piping hot. When the level of your tea gets low, be prepared for a refill, it will be served without asking. If you’re done, wave your hand over the top of the cup and say, safi, baraka, a nice way of saying “thanks, I’m all done!”

Different Types of Tea in Morocco

Even though green tea is the most common type of tea served in Morocco, there are many other varieties. Tea is not only for quenching your thirst, it’s also believed to have medicinal qualities. Different fresh herbs and types of mint are used for treating different symptoms. In winter months, it’s common to see a variety of herbs brewed in tea in order to ward off illnesses. 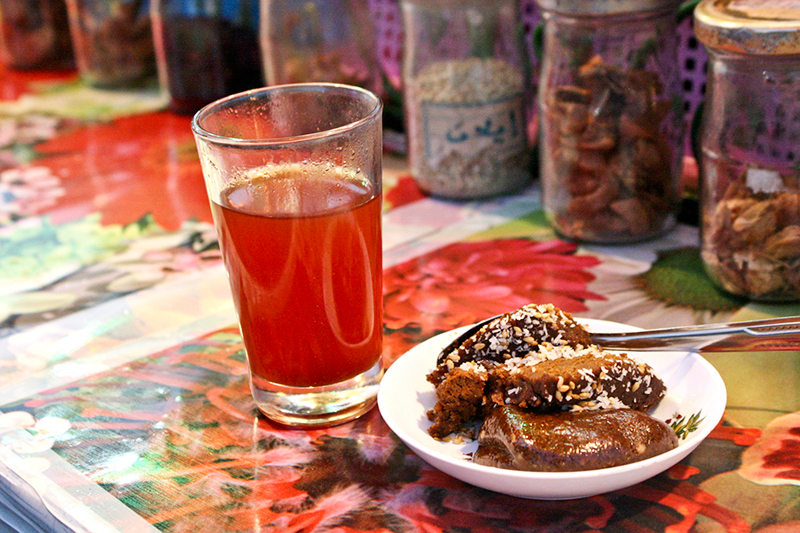 Specialty Moroccan tea and sweets. Photo by Amanda Mouttaki
A unique type of tea, called Berber tea, mixes herbs like wild thyme, mint, lemongrass, geranium, sage, verbena, wormwood and sometimes even more ingredients like dried flowers. What’s added to Berber tea will depend on the time of year and what’s on hand. The tea has a naturally sweet taste so the addition of sugar is not necessary, but some is often added anyway. The practice of steeping herbs with tea extends beyond Berber tea and it’s even common to substitute different types of herbs for the mint in traditional Moroccan tea.

The Lifestyle of Drinking Tea

Tea holds a special place in the hearts of Moroccans. It’s often one of the first things children taste after their mother’s milk as bread soaked in tea is a typical thing to feed to babies! Tea is an important medicine in the Moroccan culture, especially for people who have limited access to prescription medications or to those who prefer natural remedies. But most of all, it’s an extension of Moroccan culture’s famed hospitality. 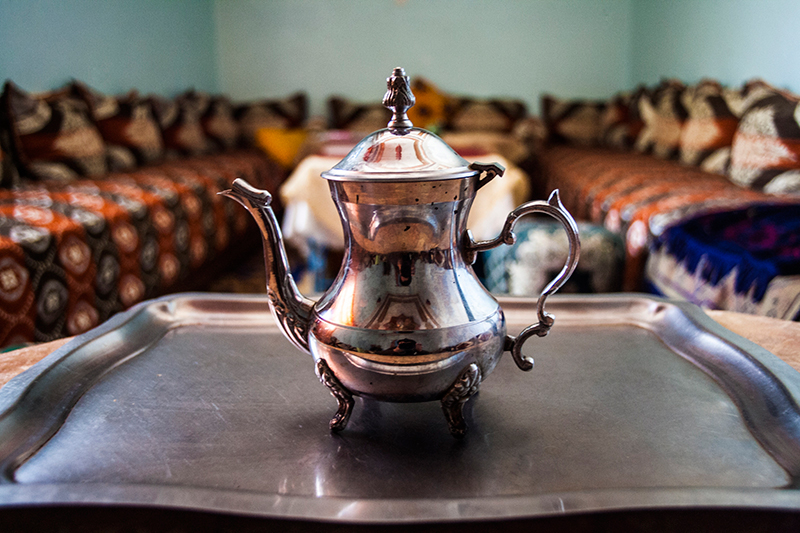 Photo by Rachid Ahitass via CC
When I married my Moroccan husband, we knew we wouldn’t be doing a champagne toast. Instead, we brewed mint tea and gave each one of our guests a tea cup from Morocco etched with the words “marhaban” (you’re welcome) in Arabic. We shared with them the tradition of drinking tea in Morocco, it went something like this:

Today, as we start our new lives together we’d like to offer our toast to you in the Moroccan spirit. Drinking tea with someone in Morocco isn’t just a passing act. Drinking tea together means you’re being welcomed into their family. You’re seen as a friend and today we’d like to welcome you all to be a part of our new family.

In the Moroccan culture an invitation to drink tea is a meaningful thing. When you travel to Morocco, you can bond with new friends and meet wonderful people over a simple pot of tea.

Have you tried Moroccan mint tea? Tweet us or visit us on facebook to share what you thought and tell us about your favorite tea varieties!