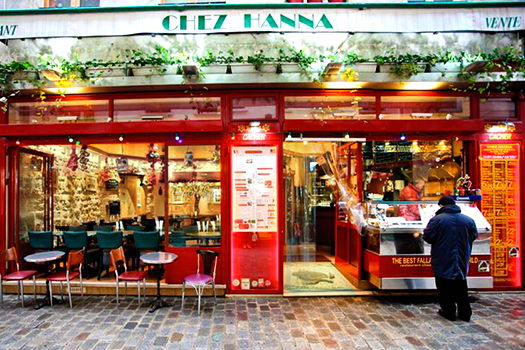 A Parisian might argue that the most local meal you could have while visiting their city has nothing to do with native French cuisine. If you were to name only one Rue in Paris that lays claim to this, it would be Rue des Rosiers, in Le Marais, with its neighborhood buzz and abundant kosher eateries lining the street. If you want a break from bœuf bourguignon and other typical French specialties, we don’t blame you. Step in Chez Hanna, your one-stop option for an alternative to traditional French dining.

When you eat at Chez Hanna, you are inadvertently picking sides in a long-standing rivalry – the war of the falafels. Mention Chez Hanna and you’ll almost certainly be met with mention of L’As du Falafel. Although L’As du Falafel may be the preferred choice of Lenny Kravitz and reigns king of falafel for many, Chez Hanna certainly holds its own and is known as the local’s best kept secret. Chez Hanna’s falafels have gained a following of loyal fans from far and wide who insist on coming here to have classics such as the falafel pita sandwich. If you aren’t in the mood for falafel, there are also an abundance of dishes that include meat; whether you’re a carnivore or you prefer your food to be vegetarian-friendly, Chez Hanna is ready to provide you with an intensely savory and satisfying experience in non-French Parisian dining.

Why We Want to Go

What We Want to Eat