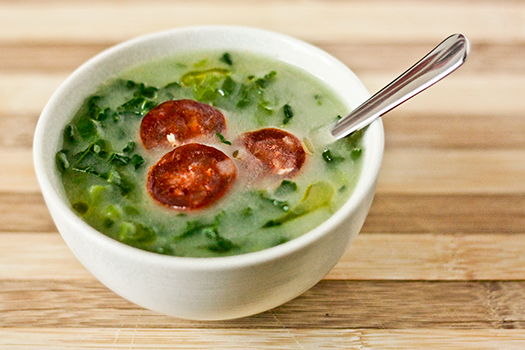 Author:
Jen
Serves: 4
Save Print
Portugal's famous "green broth" is a dish that's both healthy and hearty. Best enjoyed in winter or early spring, which the grelos are at the peak of their season, this soup is in demand and served year round. Originally from the North, caldo verde has become so ubiquitous throughout the country that it can be found everywhere, even at McDonalds!
Ingredients
Instructions
Notes
The thinner the grelos are sliced, the faster they will cook. To make preparation easier, roll the leaves up tightly into the shape of a cigar, and slice using a very sharp knife. If the grelos are not in season, they might be a little tough so you can blanch them prior to adding them to the soup. Also, if you want to strengthen the chouriço flavor of the soup, you can boil the sausage links with the potatoes, onion and garlic and remove just before blending. If you are unable to find <em>grelos</em>, you could replace them with turnip greens.
3.2.2708