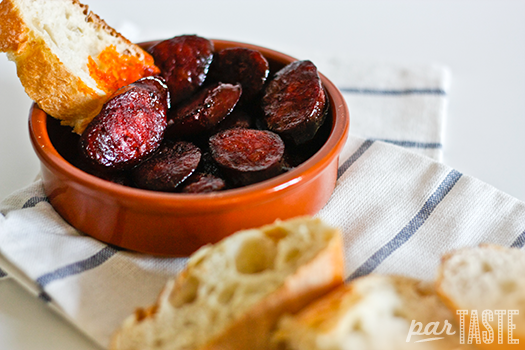 Author:
Jen
Level: Easy
Cuisine: Spanish
Serves: 4
Save Print
Although we'd never complain about eating chorizo on it's own, this Spanish dish is as simple as they come and never fails to impress. Savory chorizo is braised in and served with a sauce of bright red wine which brings the flavors of the chorizo to life. Chorizo al Vino makes for a dish that's comforting and filling, serve with something fresh and light like grilled pimientos.
Ingredients
Instructions
Notes
There are other variations of this dish which use a different poaching liquid. To mix it up, try replacing the red wine with a dry white (chorizo al vino blanco) or Spanish Sidra (chorizo a la sidra) and boil with a couple of laurel leaves.
3.2.2708