As we mentioned a couple of weeks ago, tapas may be well known outside of Spain, but they aren’t necessarily understood. While the tapas culture is a huge part of Spanish gastronomy, it is far from the only part. In fact, in some parts of Spain, tapas play a very small, if not inexistent, part in the local gastronomy. There are many eating habits and traditions around Spain and to ir de tapas only scratches the surface. 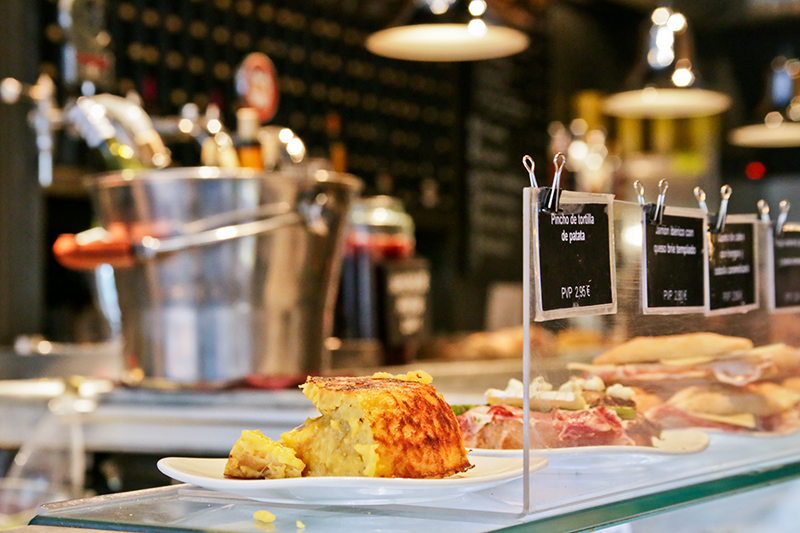 pintxos, tostas and montaditos on display at a bar

Pintxos are often confused with tapas because of the rituals associated with going out to eat them as well as their small serving size. Pintxos, as they are called in the País Vasco, or Basque Country, may be called pinchos elsewhere and are their own class of food.

So what are the major differences between pintxos and tapas? For one, tapas are small servings, but are often big enough to be shared among a few people. Pintxos, on the other hand, are not intended to be shared, and to do so would probably be difficult since they can be consumed in only a few bites. Tapas are usually fairly simple dishes (unless you are at a gastrobar) and pinchos often consist of a carefully arranged combination of components. 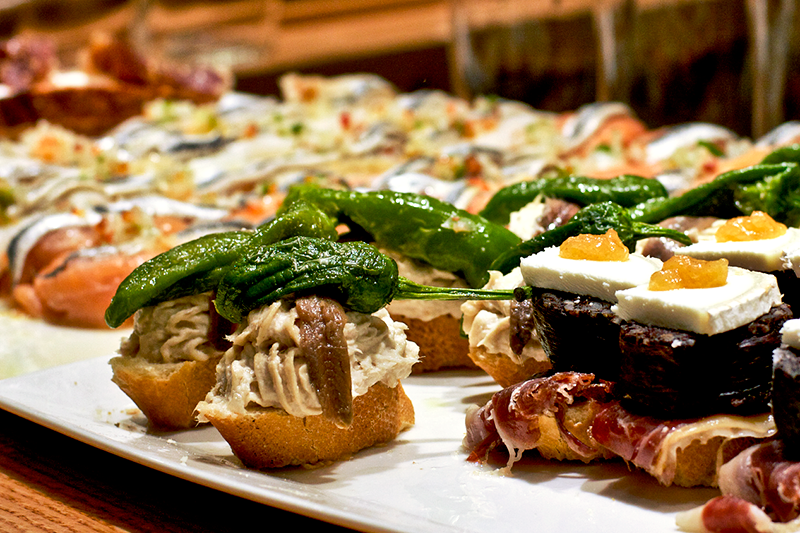 Pintxos are typically served atop a slice of bread. The word pintxo comes from the verb pinchar which means to stab or skewer. Traditionally, pintxos are served with a toothpick through the middle. The toothpick serves not only to hold things together, but also as a manner of accounting. At many tabernas in the north of Spain, you will find an array of pintxos lined up on the bar. It is often the case that you order your drinks and take a pincho or two, saving the toothpicks used to skewer each one. When you are ready to move on, you go to the bar and are charged by the amount of toothpicks you have. 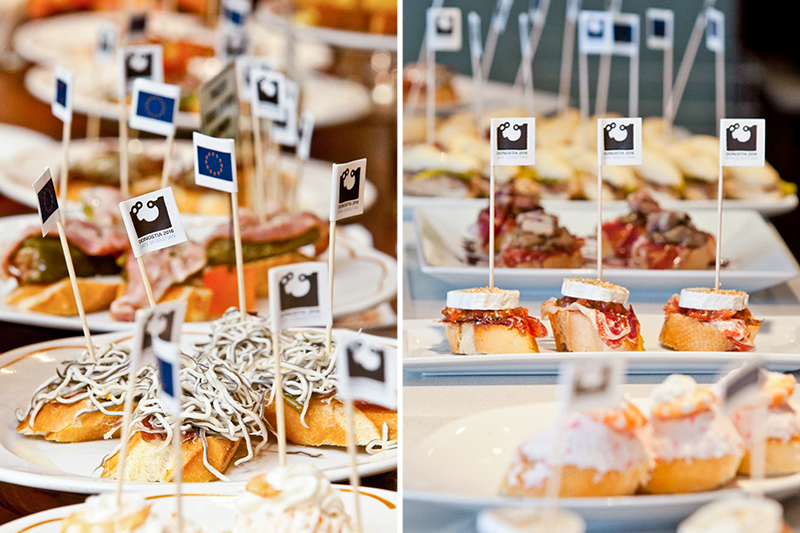 When pintxos are billed according to your number of toothpicks, it’s likely they will cost the same as one another. In some cases, different toothpicks may be used to distinguish the price of one pintxo from another. In more modern and creative pintxos bars, the use of a toothpick and bread may be omitted altogether and pintxos start to resemble modern tapas. There are both cold and hot pintxos; the former is what you are likely to find displayed on a bar and the latter are almost always made to order. Regardless of if you have cold or hot pintxos and take them yourself or order them, pintxos are not free, so make sure to pay your bill before leaving. 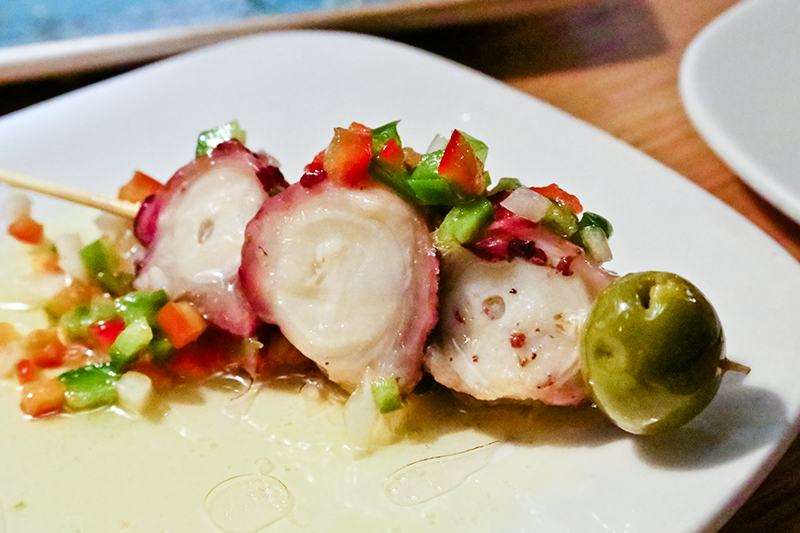 A pintxo of marinated octopus with fresh pepper relish

With all of these variables, how are you to know what the protocol is at any particular pintxos bar? Assuming you are not the only people at the bar, we recommend observing those who are already there and following suit. If you don’t see a bunch of pintxos out in front of you, it’s safe to assume that they are made to order and you should see small menus around or specialties posted behind the bar. As pintxos can be consumed quickly, if no one is at the bar when you arrive you can bet it won’t be long before someone is, just watch what they do and do the same yourself.

El Txikiteo: the Social Precursor to a Meal

Just like you can ir de tapas, you can also ir de pintxos, and to do so is often referred to as el Txikiteo. El Txikiteo is common practice in the north of Spain, particularly the Basque region, Navarra, La Rioja and Cantabria while to tapear is more common in the south, especially in Sevilla and Granada; either way you are basically on the regional equivalent of a Spanish pub crawl. Unlike pub crawls in many English-speaking countries, the goal is not to become a drunken fool, but rather to socialize and snack. To make matters more confusing, you could also refer to el Txikiteo as el chiquiteo, ir de txikitos, txikitear, tomar chiquitos or ir de poteo. No matter what you say, these things all refer to the same basic idea, and yes, it includes a bit of drinking. 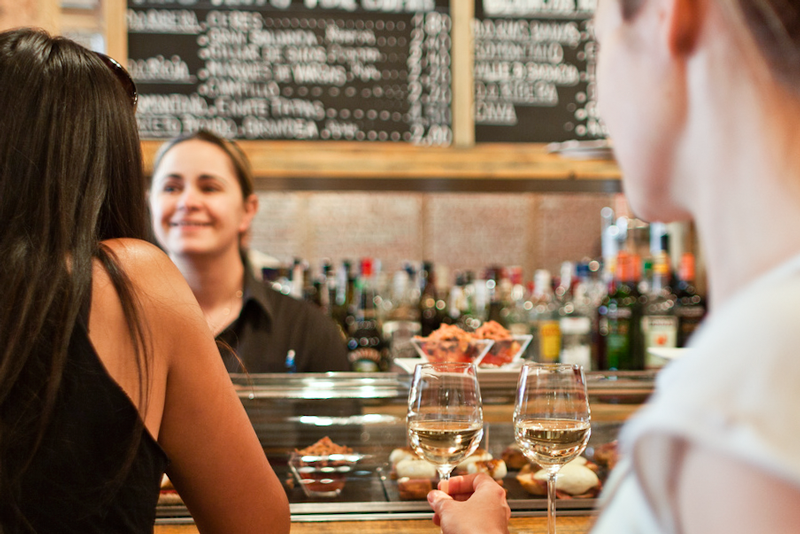 There are several acceptable beverages to drink when you are out for pintxos. For the wine drinkers, a typical wine from the Basque region is called txakoli or chacolí. Txakoli is an effervescent white, although sometimes rose or green, wine known for it’s tart flavor and young age. For red, one of the most famous wine’s from the north is Rioja. For something in between there is clarete. In appearance, clarete is very similar to a rosé, however, clarete is fermented with the skins of red grapes and rosé is not. To order, you would ask for un txikito (a small glass, also called pote) of txakoli, clarete, Rioja or tinto (house red) wine. If you aren’t in the mood for wine, you could also order a txikito of cidra (alcoholic apple cider), kalimotxo (red wine mixed with coke) or mosto (grape juice). If beer is more your thing, you can order a zurito, corto or caña of cerveza, a small draft beer. 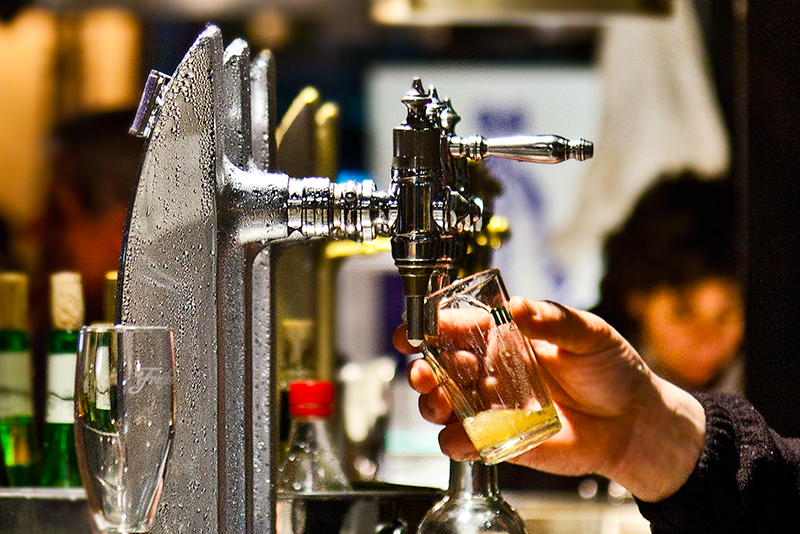 It is common practice to have a single drink and pintxo at each bar before moving on to the next location. Some bars will have a large selection to choose from, while others might only have a few options or one especialidad (specialty). With so much relocating, drinking and eating going on, it’s sometimes difficult to keep track of your cuadrilla (group of friends), not to mention your money. 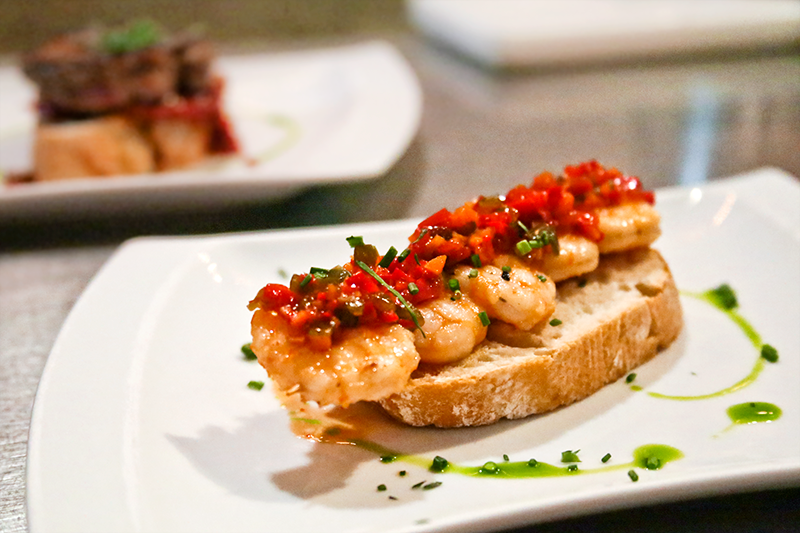 A pintxo of grilled prawns with roasted red peppers and chive

To solve that problem, locals often pay for everything from what is known as a bote. A bote is a pot of money to which everyone contributes (around 10 euro) before going out. Ideally, one person would be put in charge of the bote and that money would cover you for the rest of el Txikiteo. You can have a bote for most anything, but it works best with el Txikiteo since most pinchos and drinks cost about the same. A bote should be avoided with a cuadrilla that has a few people who will order things at a totally different price point than the rest of the group. For example, if one person is drinking top-shelf gin while everyone else is drinking beer, things could get a little awkward. So long as that is not the case, having a bote makes managing your cash much easier. 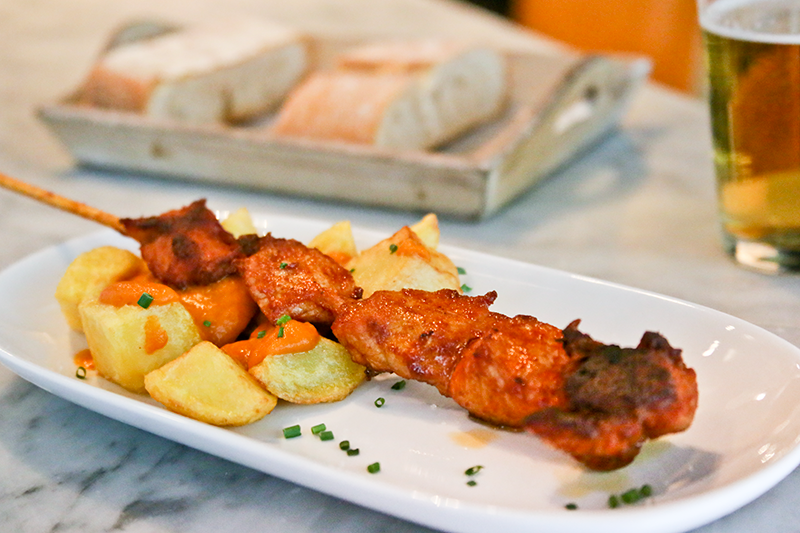 Finally, when you are out for el Txikiteo, you should be prepared to stand. Since you go to many different places, and said places (the good ones anyway) are often crowded, it’s unusual to sit down and relax. On occasion, the most popular bars might be so busy that people overflow out onto the street and enjoy their drinks and pintxos outside of the bar. El Txikiteo is a casual affair and should be treated as such, so leave your uncomfortable shoes at home and get ready to snack on the move. The transient and social nature of going out, be it for pintxos or tapas, is one of the best things about eating in Spain.