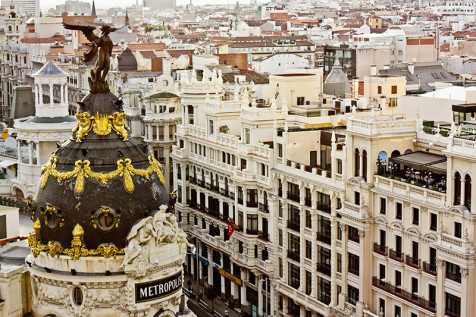 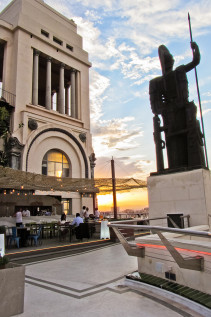 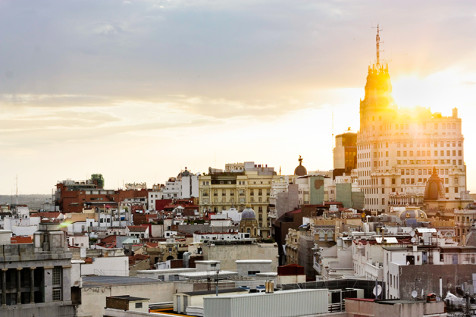 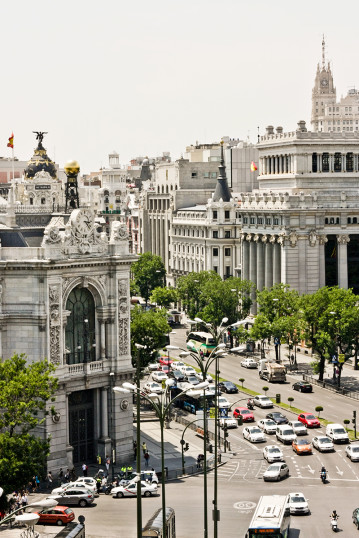 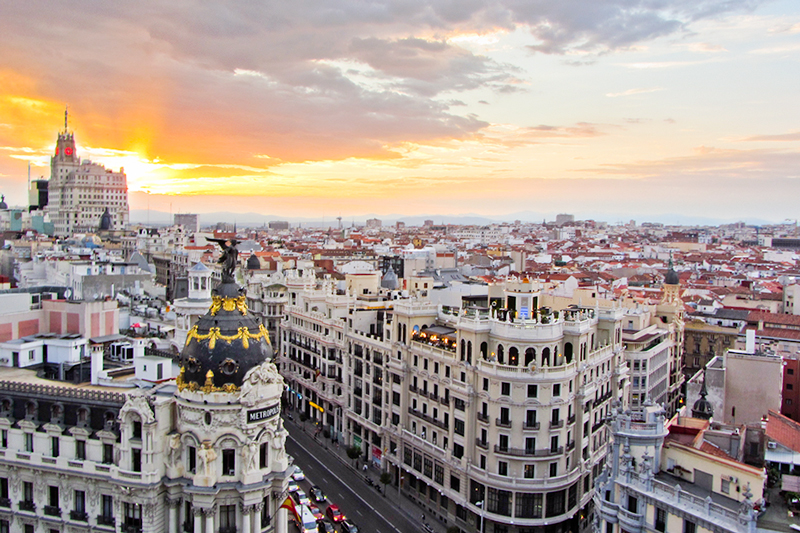 Gran Vía, Madrid’s most central artery, begins at a cluster of three of the city’s most recognizable buildings, making it one of the major geographical points of reference in a place known more for what’s kept inside its museums than identifiable monuments encountered while walking through its streets.

The first, the Metropolis building, is arguably the most well known building in Madrid, owned by the Metropolis Insurance company, it is a Beaux-Arts masterpiece. The impeccably preserved office building was completed in 1910, designed by the French architects Février, and is flanked with symbolic sculptures representing trade, agriculture, industry and mining and topped with a statue of the Goddess Victory.

From the Metropolis building, Gran Vía stretches towards the Plaza de España, lined on both sides with retail shops, hotels, stunning architecture, restaurants and bars, including Madrid’s infamous Museo Chicote. At the intersection above the Metropolis, you encounter what is commonly referred to as the “Rolex building”. Marking the official beginning of Gran Vía and similar in appearance to the Metropolis but mixing elements from renaissance, neoclassical and other architectural styles, this building houses the high end jewelry retailer, Grassy.

A short walk up from these two buildings, Gran Vía is punctuated by the Telefonica Building and Calle Fuencarral to the north and Plaza del Callao and the iconic Schweppes building to the south, both major shopping zones in Spain’s capital city.

Restaurants Near Gran Vía, the Metropolis Building and the Círculo de Bellas Artes

Celso y Manolo: This little “neo-tavern”, located in the heart of Madrid, has done an exceptional job of honoring its heritage, and in more than one way. With their modern interpretation of traditional Spanish food, Celso y Manolo draws in diners from all over the city. » see more
Mercado de la Reina: Divided into several distinct areas, this 3-in-1 establishment boasts a pinchos bar, restaurant and gin bar. Mercado de la Reina serves up a thoughtful list of traditional Spanish dishes, reinterpreted with a lighter hand but retaining all of the flavor of the recipes that inspired them. » see more