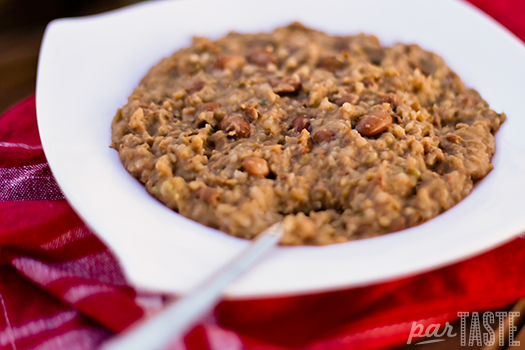 Author:
Jen
Level: Moderate
Cuisine: Italian
Serves: 4
Prep time: 15 mins
Cook time: 3 hours 30 mins
Total time: 3 hours 45 mins
Save Print
A popular dish from the region of Piamonte, panissa is usually enjoyed during the winter and around the holidays. Within the region, there are several variants of panissa. This version is representative of what is known as "paniscia di Novara", one of the most famous varieties.
Ingredients
Instructions
Notes
If you find that the rice does not seem to be cooking, add more broth from the soup at a time so that there is more liquid to be absorbed by the rice. The preparation for this dish varies from cook to cook and with subtle differences of ingredients used. If you want the consistency to be close to that of a risotto, avoid breaking the beans while cooking and keep the broth thin. If the beans break down and thicken the soup, the dish will be less risotto-like by the time the rice is cooked.
3.2.2708