It is a well-known fact that pasta is a favorite food worldwide. As one of the most versatile ingredients on the planet, pasta is used in so many ways that it has become more like a global dish than an Italian specialty. For example, fettuccine alfredo is made with the long Italian pasta fettuccine, but the creamy “alfredo sauce” often found in stores would never be purchased, or even homemade, by a self-respecting person in the country of Italy. Alfredo sauce does NOT exist in Italian cuisine. Another example, mac n’ cheese, is an American favorite that uses pasta as a main ingredient, yet the Italian equivalent is quite different and is certainly not something that you would find sitting on a shelf with a pack of powdered flavoring. 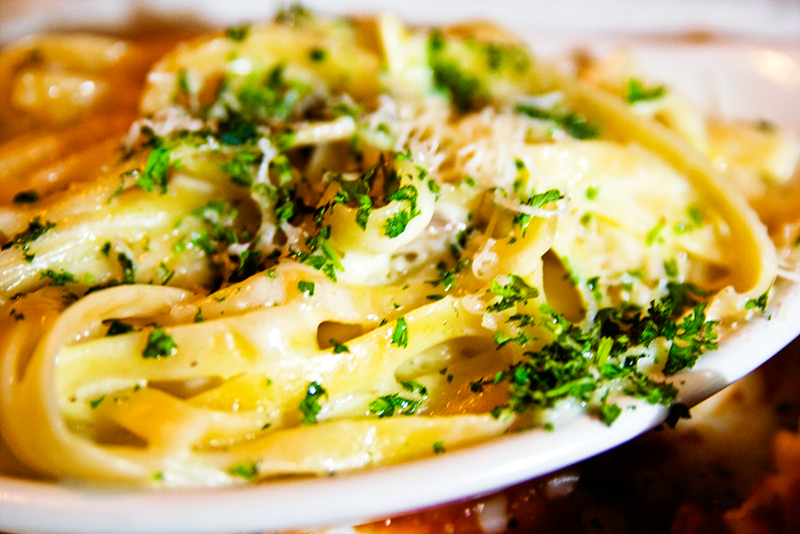 Fettuccine Alfredo, an American favorite that you won’t find in Italy. Photo by Steven Depolo via CC

This may make Italians seem elitist when it comes to eating, but when you are talking about pasta, they’ve had over a thousand years of practice combining noodles and sauces. Italians are sticklers when it comes to their food traditions and flavor pairings. Making pasta “the Italian way” is easier than one might think. The problem is that we get so caught up with the convenience of doing something, that a simple tasks like boiling pasta falls into routine and, before you know it, your noodles have been cooked too long and have reached the point of being mushy. When that happens, you have no choice but to overload them with sauce for the sake of tasting any flavor in what you are eating.

The Art of Cooking Pasta

Cooking pasta the Italian way means you taste the noodles, the starchiness of a dried pasta should be the first thing you recognize when you are eating. To get started, make sure that you are cooking with enough water. For every pound of pasta, you should have at least 5 quarts of boiling water. To ensure your noodles are cooked to perfect level of al dente, boil your water hard, that means large bubbles coming to the surface, not the little wimpy ones that indicate the water has just started boiling. Properly boiled water is the first step in proper pasta cooking.

Once the water is actually boiling, add in two entire handfuls (yes, that’s right) of large, coarse, sea salt. That sounds like a lot doesn’t it? It should be. You see, not only will the water’s salinity help regulate the temperature so that your pasta gets cooked evenly, it will bring out the flavor of the dried pasta tenfold. When your water is ready, you can drop in the pasta and stir it around to keep it from clumping. Whatever you do, do NOT add olive oil to the water to prevent sticking. If the noodles are coated with oil while cooking, it will prevent the sauce from sticking to them when you are ready to eat. 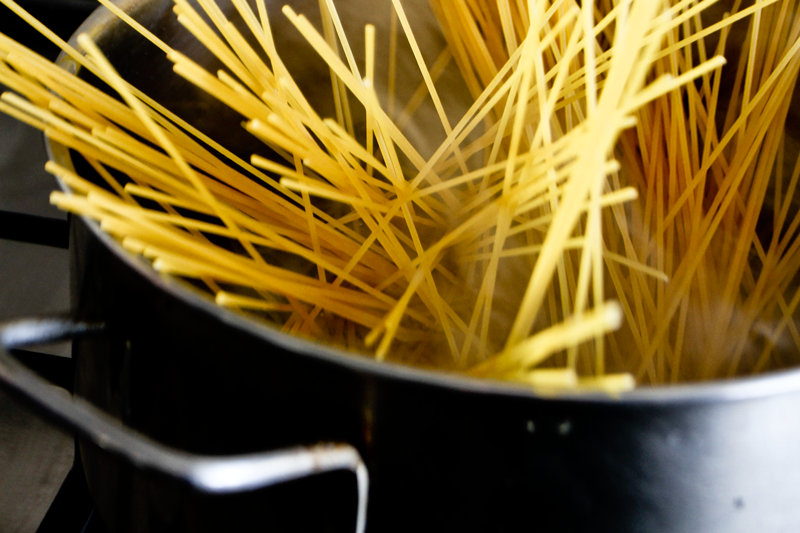 If you leave pasta like this, it won’t cook evenly. Make sure to stir the pasta in immediately. Photo by Nina Matthews via CC

Let your pasta boil uncovered for about 4 minutes (or 2 minutes for thin pasta like vermicelli), stirring occasionally. After the first four minutes of cooking, taste your pasta every minute. Initially, the noodles are going to be crunchy. That is great because you certainly don’t want to cook your pasta past al dente. When you bite into a crunchy piece of pasta, you can tell to what point it has been cooked. When you first start tasting your pasta, the outside will be nice and soft, but the middle will probably still be hard and unpleasantly starchy. The solid center of the pasta will shrink with every minute of cooking. Your goal is to turn off the burner about thirty seconds before that middle piece disappears. This means you are going to stop cooking before you think your pasta is ready. Don’t worry, the inside continues to cook and you still have to toss it with your sauce, which involves an extra bit of heating! 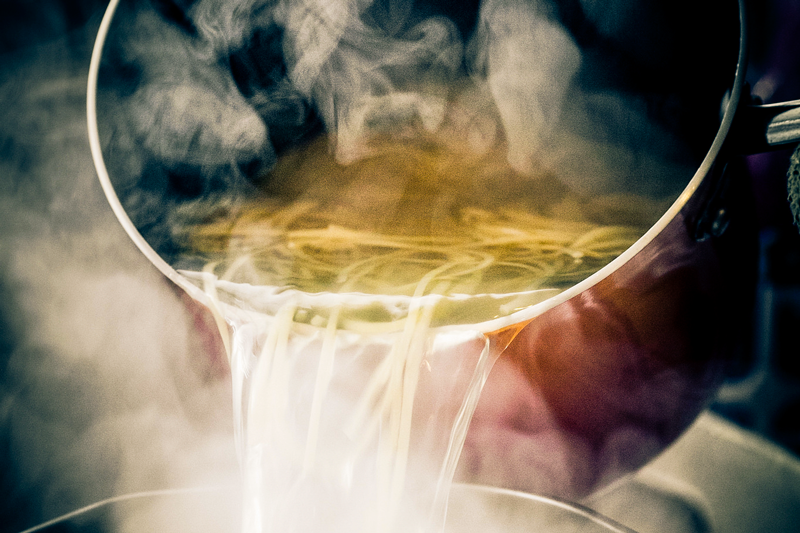 Drain your pasta 30 seconds before you think it will be ready. Photo by Brian Patrick via CC

When it comes to pasta sauce, the quantity has to be proportional to the amount of pasta you are serving. Every piece of pasta should have sauce on it, but the sauce should not be excessive or soupy. The proper way to achieve noodle / sauce harmony is to simmer your sauce in another pan (even if it’s not homemade) to heat and reduce it while the pasta is still cooking. When you determine that the pasta is done boiling, drain it, but don’t rinse it, you want it to keep a starchy coating. Once the pasta is drained, it should be put back in the pot and you can pour the sauce over it immediately. Mix everything together for a minute or so over low heat, the starch left from not rinsing your pasta will help thicken the sauce a little. When everything is ready, use tongs or a toothed spoon to serve your pasta. Even if you accidentally added too much sauce, the serving utensils will drain away any extra that you don’t need on your plate.

Formaggio: to Cheese or Not to Cheese

First of all, let’s get something straight… that clumping, scented powder that comes out of a green tin, that is NOT what any Italian would call Parmesan cheese. The real stuff, Parmigiano-Reggiano, or its lovely variants, are often found sprinkled atop a plate of pasta in Italy. But note that we said sprinkled, Italians add cheese like you might a seasoning, they don’t laminate their entire meal with it. When you consider what we told you about sauce to noodle ratios, and the fact that Italians actually like to taste their pasta when they eat it, it’s easy to understand why they don’t need to add so much cheese to their dishes. When you are served a plate of noodles with an obscene amount of sauce, it makes some sense that you’d cover the sauce with obscene amounts of cheese, but that’s not the way they serve their pasta in Italy. 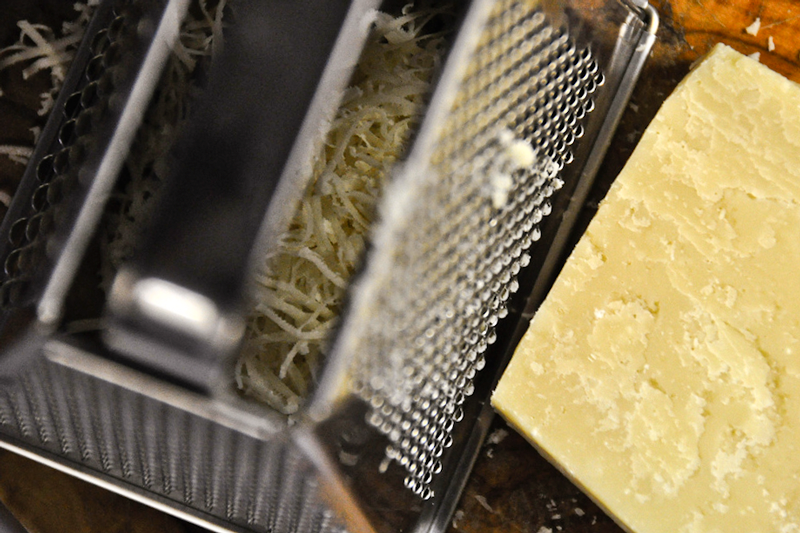 This is what real Parmesan looks like. Photo by Cyclone Bill via Creative Commons License

There are even some pastas which you shouldn’t add cheese to at all. For example, cheese never, I repeat, NEVER goes on a pasta with seafood in it. To mix fish and cheese goes against tradition, what is socially accepted, and what is basically considered law in Italy. Technically, it’s not against the law, but trust the experts when they say that putting cheese and fish together in pasta (and in general) is a combination that is basically equated to blasphemy. 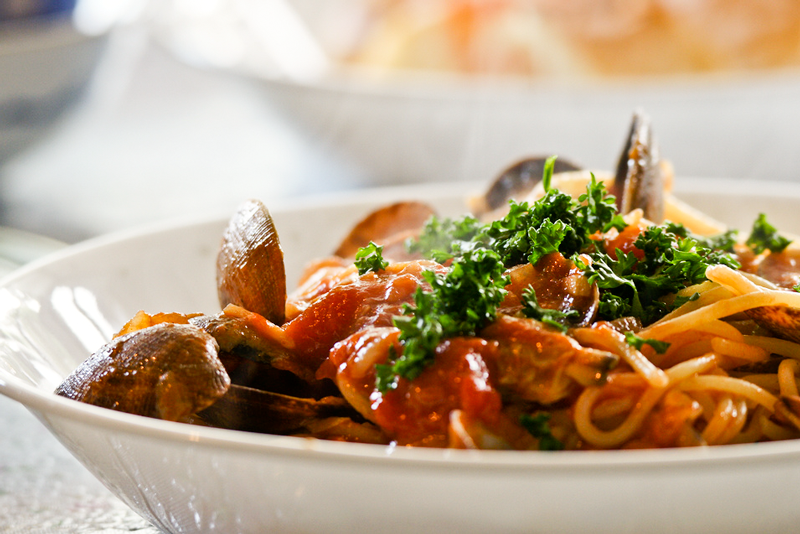 Spaghetti alle vongole in rosso, notice the absence of cheese? Photo by Rok1966 via CC
When your pasta is served with, or already includes cheese, the Italians support your urge you to go nuts with it. Have a plate of trofie al pesto? Pesto happens to be made with a considerable amount of cheese, but no matter, throw some more on there! Did you opt for pecorino melted over rigatoni, the equivalent of an Italian mac n’ cheese? Put some Grana Padano on it! Perhaps to compensate for the strict no seafood with cheese rule, Italians have determined that almost everything else is fair game. If you are given the option of fresh grated cheese, it is open season, no judging!

The Art of Eating Pasta

How do you eat your pasta? In Italy, pasta is eaten with a fork, and that is the end of the story. Want to twirl your spaghetti around on a spoon? You can, but despite what you may have been told, that’s not really a thing in Italy. Think cutting your pasta is polite? It may seem like a good idea, but you’ll quickly realize that you’ve shot yourself in the foot when your fork no longer has the ability to entwine noodles and pick them up. So how does one go about eating a plate of long noodles like they are a native Italian? Simply take your fork, stick it into the mound of pasta, turn it over one time, and put it in your mouth. You may not be able to manage the whole bite, but the pasta isn’t going anywhere, you can eat the rest of it with the next bite. If you must use them, no one will confiscate extra utensils from you, but you will certainly stick out like you don’t know what you’re doing. 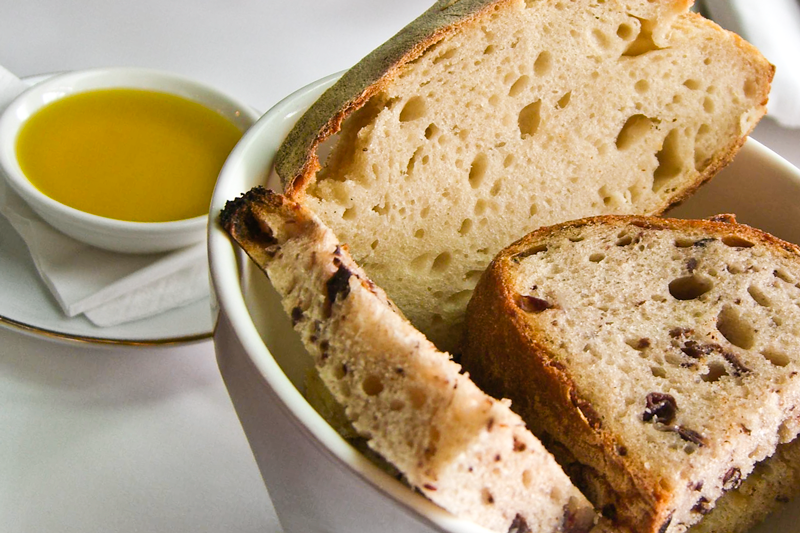 Believe it or not, this is not a common table-top scene in Italy. Photo by Alpha via CC

In many Italian restaurants outside of Italy, you will be offered olive oil, vinegar and a basket of bread when you sit down to eat. This is a very un-Italian thing. In countless movies we see boisterous Italian men enjoying bread with their pasta, but note, with their pasta, not before they’ve ordered a meal or while they are waiting. The tradition of eating bread with pasta still lives on, and it’s called fare la scarpetta. In this end-of-the-primi practice, bread is used as an edible utensil to pick up any leftover sauce that remains after you’ve eaten your pasta, not for pre-pasta snacking. To use bread for anything other than to fare la scarpetta, particularly if it requires dirtying a plate with oil and vinegar before you receive your primi or segundi, is considered poor form. Besides, if you fill up on bread before your meal really starts, how do you expect to enjoy the multiple courses that are characteristic of Italian-style dining?

Not All Pasta was Created Equally

Did you know that there are over 400 unique varieties of pasta in Italy? Learning about all of them is no small task, even for the most dedicated Italian foodies. Despite such incredible diversity, Italian law recognizes only 4 categories of commercially produced pasta and it may come as no surprise that there are strict laws governing each category. To help guide you through the many types of pasta in Italy, our next article will focus on the differences between two prominent categories. Check back with us in a couple of weeks or sign up for our monthly newsletter to make sure that you don’t miss anything!