Have you ever been out at an Italian restaurant and had a simple pasta dish that just blew your mind? Did you think that the pasta was so fantastic because they must be making it by hand? If so, you should probably think again. Although a traditional Italian restaurant very well could be making some of their pastas by hand, there are as many, if not more, that don’t. Depending on the dish, using a quality, factory-made pasta secca (dried pasta) might even be better than using a pasta fresca (fresh pasta) that was made in-house. 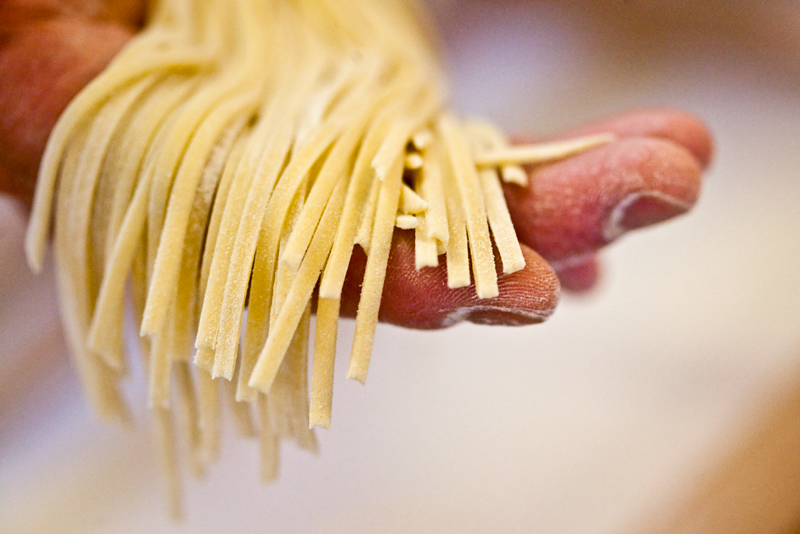 A handful of pasta fresca. Photo by René Kyllingstad via Creative Commons License

A common misconception is that fresh pasta is superior to dry pasta and that all shapes of pasta can be found “fresh” in Italy. Although during the initial process of making pasta, all pasta is fresh, not all pasta is intended to be cooked fresh; pasta secca is not merely pasta fresca that has been left out to dry! A traditional pasta secca is made with durum wheat semolina and water. When you are talking about pasta fresca, recipes vary by region and can be made with egg in place of water and a soft wheat flour in place of semolina. There are some shapes of pasta secca that don’t exist as pasta fresca, and the opposite is true as well. When deciding to cook with pasta fresca or pasta secca, you should consider your intentions for the pasta. 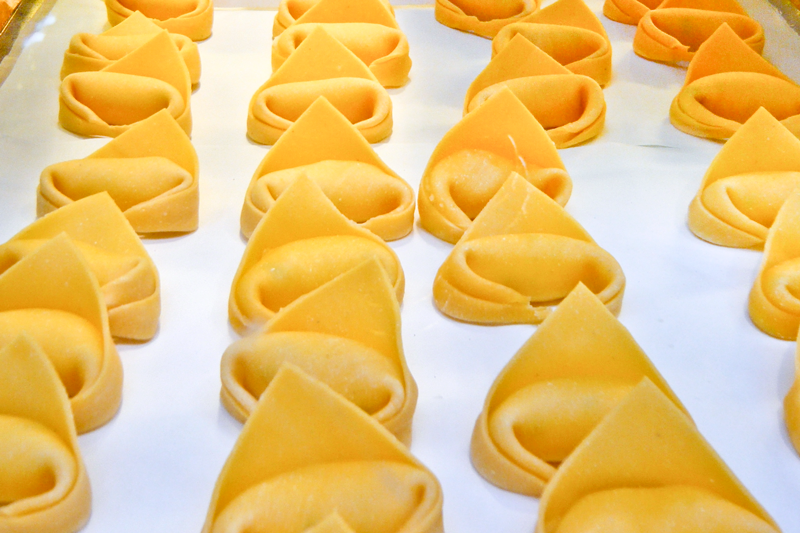 Tortelloni, a large stuffed pasta, only available as pasta fresca. Photo by Jessica Spengler via CC

The first thing to consider is when you intend to eat the pasta in relation to when you intend to buy (or make) it. Pasta fresca is best when it is made fresh. If you are going to cook with it, ideally, you would make it yourself the same day. Store-bought pasta fresca is very perishable and should be used within 4 or 5 days. Some packaged fresh pastas have an extended shelf-life and will hold up even longer when frozen, but those pastas invariably contain preservatives. We advise against using pasta fresca that contains stabilizers and chemicals, go for pasta secca or get your pasta fresca as close to the time you intend to cook it as possible. 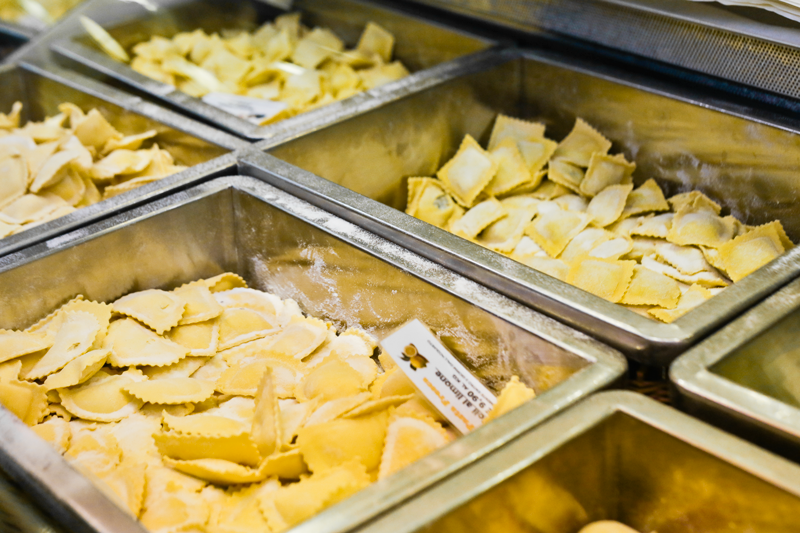 If you aren’t careful, you could overcook a stuffed pasta fresca and risk loosing all of the filling.

The next question to ask yourself is how skilled are you when it comes to cooking pasta al dente? Pasta fresca has a much shorter cooking time than pasta secca and usually requires less than 3 minutes to cook perfectly. If you are the kind of cook who likes to step away from the kitchen and do other things while you are cooking, you could easily ruin your pasta fresca with overcooking. 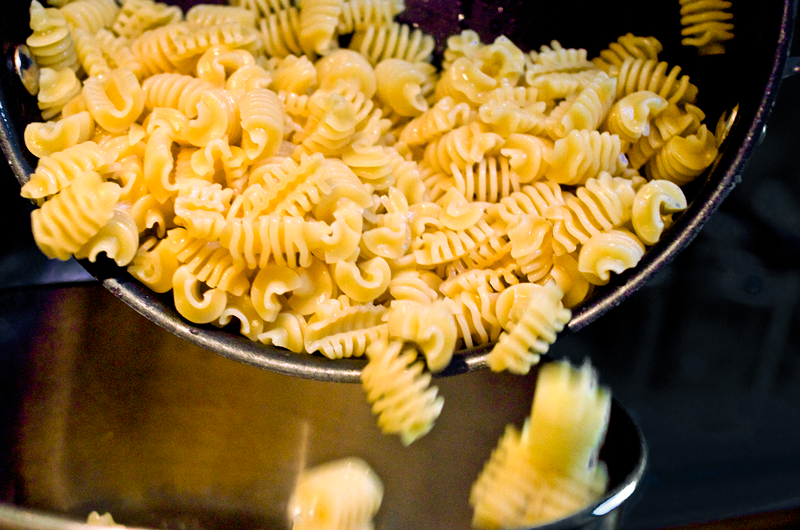 Another important thing to consider is what kind of sauce you intend on making. The rougher texture of pasta secca makes it preferable for holding onto any type of sauce that is rustic or heavy. A more delicate sauce made with butter or cream will meld better with a tender pasta fresca. When you are cooking pasta fresca you want to make sure that the flavors of the sauce you are using are light enough to not overwhelm the taste of the pasta entirely.

The Dos and Don’ts of Pasta Toppings 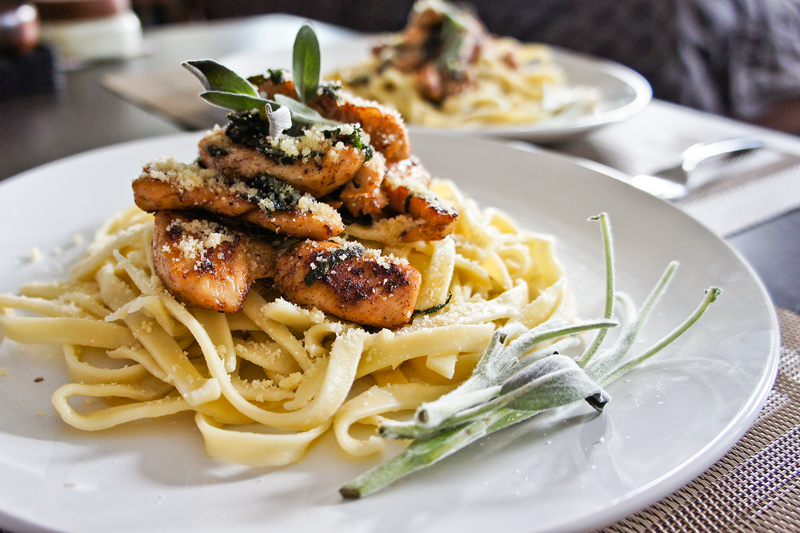 A combination like this breaks some serious rules in Italy. Photo by Andrea Goh via CC

Just as choosing fresh versus dry pasta should make sense for the type of sauce you are using, pasta shapes also have a function specific to the type of sauce that they carry. The abundant variety in shapes isn’t just to keep things looking interesting. Haphazard mixing and matching of pasta shapes and sauces is not something that is done in Italy. While the rules for pasta and sauce pairing are a little more flexible than most other Italian food traditions, there are still some things that you just don’t do. When you see a restaurant that blatantly ignores a food rule, that’s a dead giveaway that they aren’t interested in authentic Italian cooking. Did you find a quaint looking Trattoria serving spaghetti and meatballs? Don’t go there. Meatballs are a secondi, they don’t belong on top of your spaghetti. For that matter, ANY pasta containing meat in a non-sauce form can be taken as a sign of warning; Italians would never serve pasta with slices of meat as a topping.

A Break from Tradition, Even in Italy

In recent years, we have begun to see an evolution in the pasta industry. One of the most obvious changes to pasta, both abroad and locally, comes in the form of additional ingredients used as flavorings. Flavored pastas have become more and more popular and are starting to become mass-produced. This started out with specialty pastas made with exotic ingredients like squid ink, but has moved on to other combinations like lemon chili or spinach and garlic. While squid ink pasta is considered sophisticated enough to sell in a restaurant, it is unlikely that you will find other flavored pastas being sold in dishes that are cooked professionally. The general absence of flavored pastas in the Italian restaurant scene may be because finding just the right sauce to complement a lemon chili pasta would most likely involve a very un-Italian combination of ingredients. Things may be changing, but when it comes to Italian food traditions, any changes are bound to occur slowly. 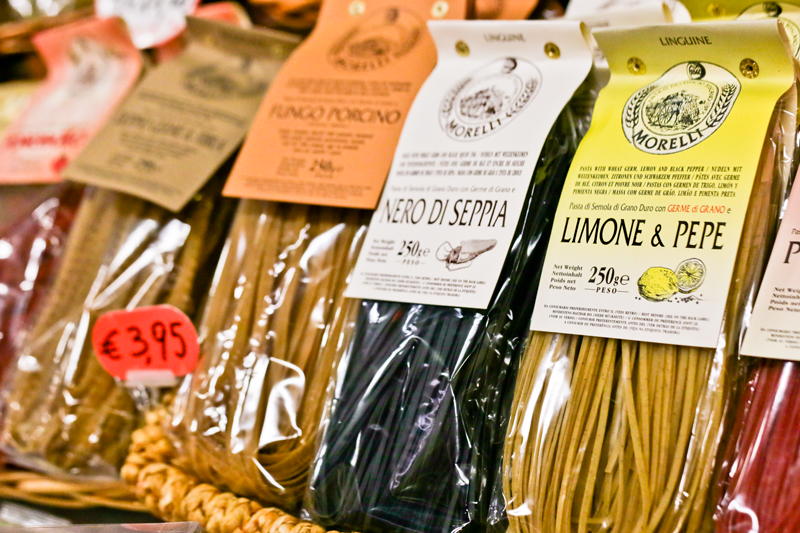 Flavored pastas at the Mercato Centrale in Florence, Italy.

With flavored pasta, you don’t need a lot of sauce and pasta shapes are usually not that varied. The pasta itself is the flavor that you want as the boldest on your palate so if you choose to cook with a flavored pasta, we recommend serving a simple butter sauce unless you have a good instinct for complex flavor pairings.

Picking the right Pasta Shape for the Sauce you are Serving

With hundreds of pasta shapes in existence, a decision to pick one might seem
arbitrary. That is rarely the case in Italy. The 3rd and final installment in this 3-part series will focus on short, long and filled pastas, some of their most common varieties and suggested sauce pairings.  If you missed it, check out are article on How to Eat Pasta Like an Italian, the first in this series. To learn the basics of pasta shape and sauce pairings, check back with us in a couple of weeks or sign up for our monthly newsletter to make sure that you don’t miss anything!