When it comes to the world of pasta, even those who’ve been eating the Italian staple since they got their first teeth might be surprised by how little they really know about pasta in its many varieties. Considering dried pasta alone, there are too many shapes to count. Start adding in filled pastas, and modern novelty pastas, and you’ll soon end up with a gargantuan list that would take years to memorize. When I was a child, I innocently assumed that pasta variety could be accounted for because the pasta-making companies liked children and made interesting shapes for our entertainment. Yes, different shapes of pasta are texturally pleasing, but many are created in their various forms to hold a specific type of sauce. 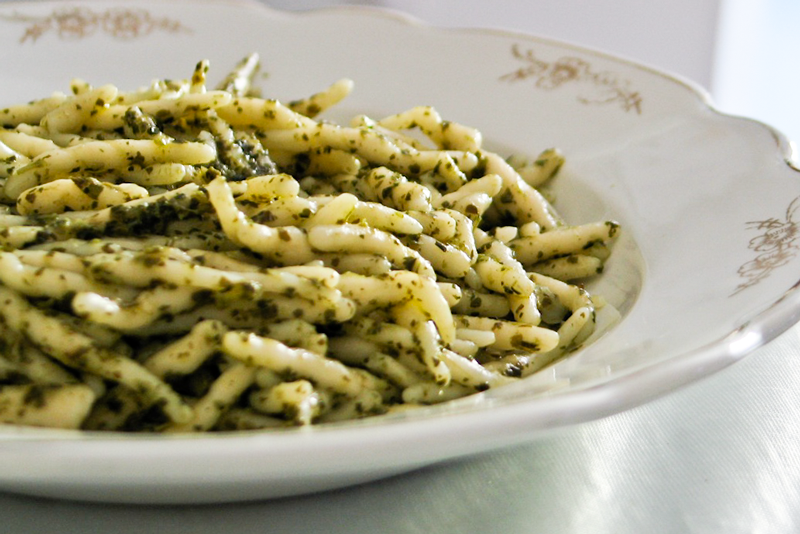 Trofie al pesto is a prime example of this. Trofie is a short, two inch, hand-twisted pasta typical of Ligurian cuisine. Making trofie by hand gives their shape a bit of irregularity, resulting in a midsection that is a little bit denser than that of your average pasta shape. Because of this, trofie have a hearty consistency and the ridges created by twisting the dough helps to hold pesto better than any other shape of pasta. This does not mean that pesto must always and only be served with trofie, but the two are always found together in traditional style Ligurian dining.

Learning all of the typical pasta sauce and shape combinations would be a daunting task for anybody. However, there are some shapes that you would do well to remember. Pastas can be generally grouped by shape and those groups tend to have loose guidelines when it comes to sauce pairings. If you learn these foundations, you’ll be able to seek out the best pasta for the sauce you intend on making.

When pasta is produced, it is shaped in one of two ways: by hand or by extrusion through a die to achieve a desired texture and form. Long pastas tend to be less complex in shape and are cut in large pieces that call for wrapping around a fork before eating.

Strands: Long strand pastas are among the most popular and include the world-famous spaghetti. Considered “the original” pasta by many, spaghetti is an Italian restaurant staple, whether served with a fine seafood and tomato broth or simply with olive oil, butter, and Parmesan cheese, a typical preparation for children whose “tummies are hurting”. Long strand pastas that are similar to spaghetti include
capelli d’angelo (angels hair), which is thinner than spaghetti, and vermicelli, which is thicker than capelli d’angelo but thinner than spaghetti. When serving a long thin pasta, it’s best to use a sauce that is relatively light. Smooth, thin sauces, such as those that are tomato or oil based, spread well and are perfect for coating long strand-shaped noodles like spaghetti. 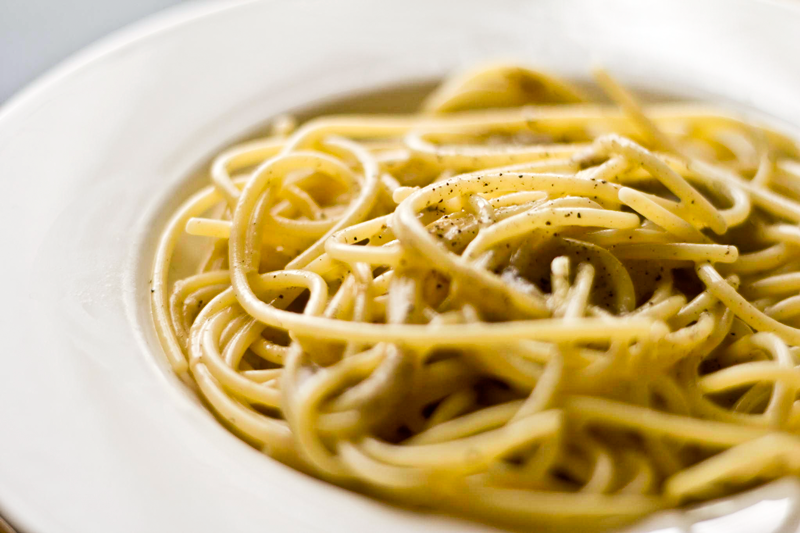 Tubes: Tube shaped pastas are more common in short varieties, but there are a few major types that are found cut into longer pieces. The most well known long tube pasta is buccatini. Buccatini are straw-like in shape and resemble thick spaghetti with a hole running through the center.

A classic pasta / sauce paring is Buccatini all’Amatriciana. All’Amatriciana indicates that the sauce is in the style of Amatrice, a small town in the Lazio region of Italy. In Amatrice, this type of sauce is actually served with spaghetti, but Roman adaptations of the dish popularized the use of buccatini over spaghetti. The sauce is made by simmering tomato with guanciale (cured pork jowl) and sometimes garlic. When the sauce is ready, it is mixed with the pasta and served with pecorino cheese. Further adaptations of the original recipe as adopted into Roman cuisine include onions in the sauce and the use of percorino romano which has a stronger, saltier flavor than the pecorino used in Amatrice. 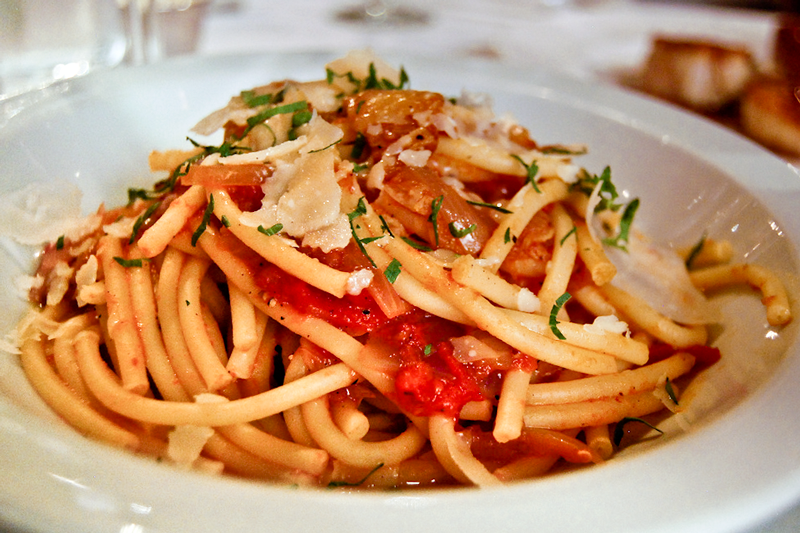 Beyond buccatini, other notable long tube pastas are perciatelli, with the same shape but a slightly thicker width than buccatini, and fusilli bucati, a hollow noodle with a corkscrew shape that is available lunghi or corti (short). Long tube pastas are great for holding sauces similar to those paired with regular spaghetti, but they have the added bonus of the hollowed center and thicker texture, which makes them particularly good for stronger flavored, fluid sauces that can fill the center of the pasta, making it extra tasty.

Ribbons: Ribbon pastas are flat noodles which can often be found fresca or secca and they can be made by hand fairly easily. One of the most well known ribbon pastas is fettuccine. Other prominent varieties are tagliatelle and paperdelle. The smooth, flat surface of ribbon pasta makes it good for pairing with sauces that are rich or creamy. The more surface area the pasta has, the more robust of a sauce it can handle, which is why you will find a thick pasta like tagliatelle paired with hearty meat sauces like ragù alla bolognese.

Tagliatelle with ragù alla bolognese. Photo by Surtr under CC, adapted by ParTASTE

Pasta corti refers to pasta that is cut short or made into many small pieces. The more complex varieties of short pastas can only be produced commercially while short pastas with filling are usually best when made fresh and by hand rather than with machinery.

Shaped: Shaped short pastas are rather hearty and their ridges, nooks and crannies make them good for pairing with rich sauces, particularly those which include bits of meat or veggies. Farfalle, which means “butterfly”, is the popular bow tie pasta which has long been a children’s favorite, particularly when paired simply with butter and Parmesan cheese. With a relatively simple form compared to other short shaped pastas, the smooth, large surface of farfalle is perfect for holding decadent cream based sauces. Other well recognized short shaped pastas that would do well to hold a more rugged sauce include fusilli corti, rotini and orecchiette. 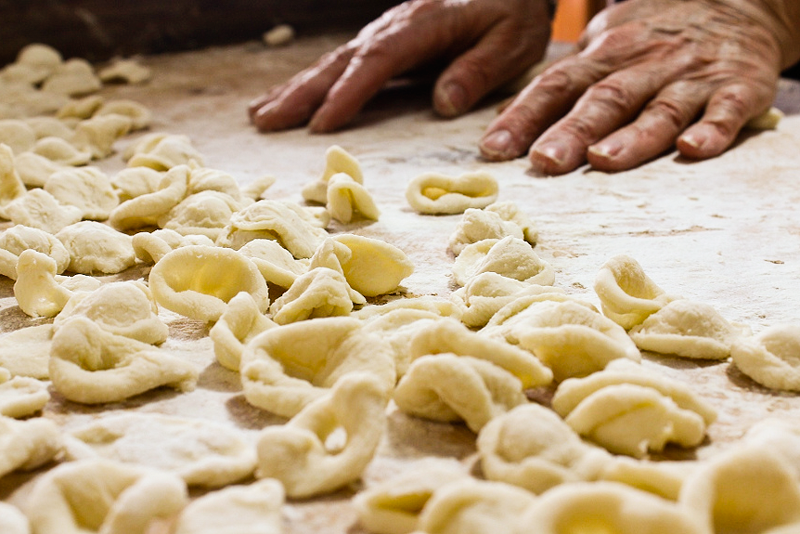 Tubes: When it comes to short tube pastas, the variety can be overwhelming. A couple of the most common form are penne and rigatoni. Coming from the Latin word for “quills”, and Italian word for “pens”, penne are the small cylindrical pasta with opposing ends that angle up and down. Penne can be found with ridges running through them or with smooth sides and are most famously paired with arrabbiata, an “angry” (spicy) sauce made with tomato and chili peppers. 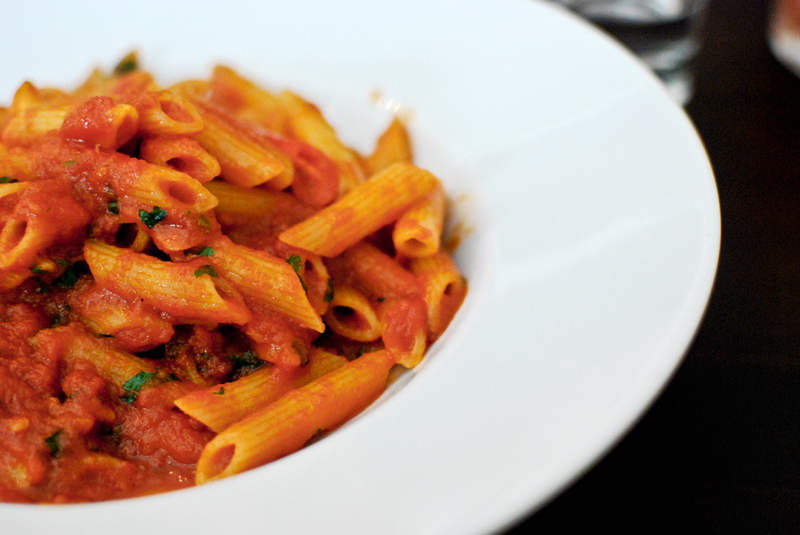 Coming from the Italian word rigato or “ridged”, rigatoni are cylindrically shaped, furrowed pasta tubes that are a little bit bigger than penne and have blunt rather than angled ends. Rigatoni comes primarily from southern and central Italy, a fact that means you are most likely to find it paired with ingredients from those regions. The shape of short tube pastas makes them incredibly versatile and, as a result, you’ll find them used in everything from pairing with chunky sauces to baking in casseroles to mixing with vegetables as pasta salad. Rigatoni is the perfect example: it is just as well served with a rabbit ragù as it is with a fish and cherry tomato sauce. The possibilities for cooking with short tube pastas are abundant thanks to this shape’s fantastic adaptability.

Pasta Ripiena: Pasta ripiena refers to pasta that is filled with cheese, meat, fish, or vegetables. Outside of Italy, stuffed or filled pastas are often referred to as ravioli, but in reality there are many different kinds of stuffed pasta with distinct names based on their particular shapes. The origins of stuffed pasta were reputed to be a way to use leftovers that caught on and spread all over Italy. Today, many fresh stuffed pastas can be purchased at pastifici (pasta stores) across Italy. Although what’s available in terms of filling is likely to change depending on region and seasonality, 3 typical shapes that are often sold by a pastificio are tortelloni, agnolotti and ravioli.

Tortelloni, along with tortelli and tortellini, are some of the oldest types of pasta ripiena. Many foreigners who enjoy Italian food with any sort of regularity are familiar with tortellini. Tortellini, tortelli and tortelloni share a similar shape but are of different sizes; small, medium and large, respectively speaking. The large size of tortelloni results in a shape that resembles a triangular pillow. You will find this type of pasta ripiena throughout different regions in Italy, many of which will be called by a different name and found stuffed with whatever ingredients are present in the region and are in season at the time you are visiting, ranging from veal to lobster to pumpkin filling. 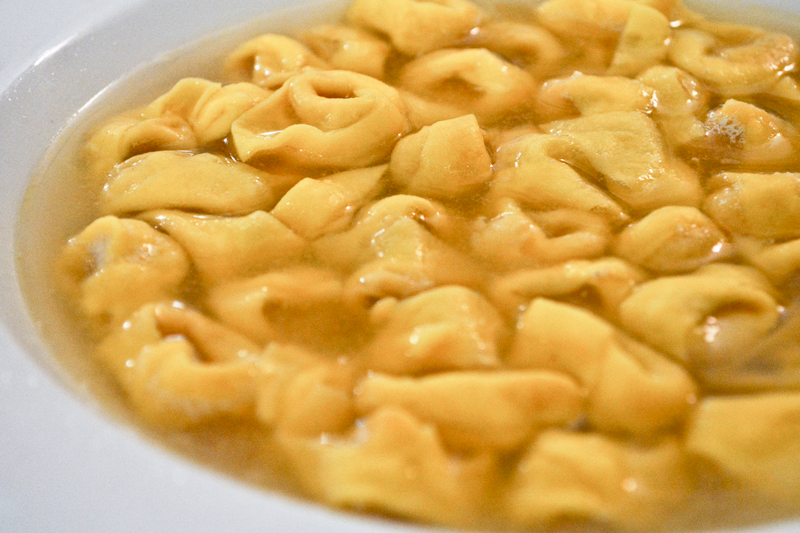 Tortellini in brodo (broth) from Bologna. Photo by Pug Girl under CC, adapted by ParTASTE

Agnolotti are a poorly understood type of stuffed pasta that resembles ravioli but are much smaller and are generally made into a rectangular shape with cylindrical shaped filling. No one seems to know whether the name agnolotti comes from a supposed creator of the pasta shape, Angelot, or if it simply comes from the latin word “anellus”, which means ring and could be meant to describe the shape of the filling inside agnolotti. Traditionally, agnolotti was stuffed with meat and vegetables, but nowadays it can be found in many restaurants stuffed with a wider variety of different ingredients. 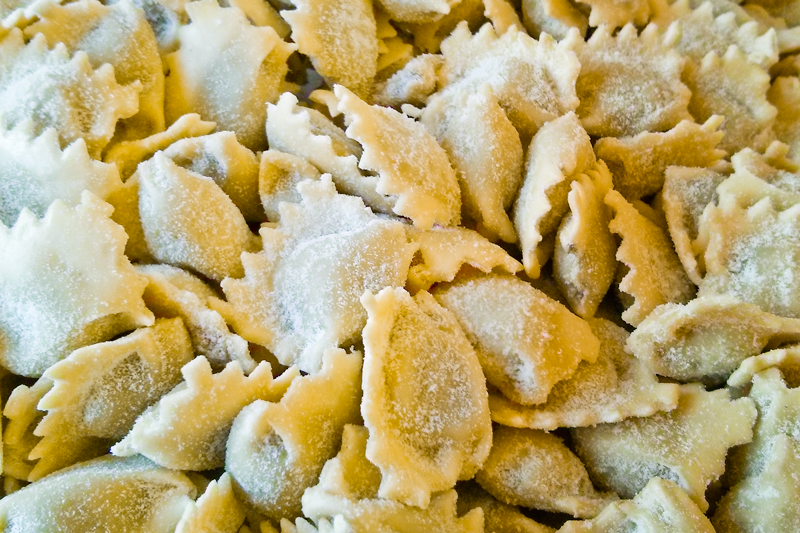 Ravioli, arguably the most universally adopted form of pasta ripiena, is a square shaped filled pasta, resembling a pillow, made from two sheets of fresh pasta with filling sandwiched in between. Like tortelloni, ravioli can vary in size, the smaller version being called ravioletti. One of the more ubiquitous fillings for ravioli is spinach with ricotta cheese, but like most pasta ripiena, ravioli fillings are found with a great deal of regionally influenced variety. 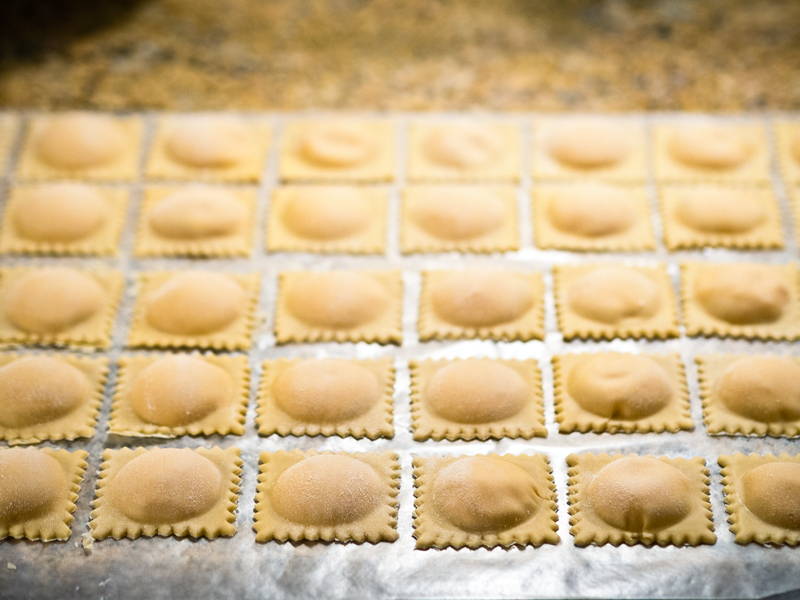 Freshly made ravioli. Photo by Robert S. Donovan under CC, adapted by ParTASTE

Despite so much diversity in types of pasta ripiena, a few things ring true about filled pastas even when speaking generally. First of all, they are typically reserved for special events or holidays when they are made at home, as preparing enough of them to feed a lot of people, or even a single family, is not easy. Although pasta ripiena can be purchased dried or frozen in some cases, fresh pasta ripiena is always best, no matter the shape or the filling. Finally, when it comes to sauce pairing, you want to choose something that doesn’t overwhelm the flavor of the pasta or the filling. Typical sauces include those that are butter or cream based, a light tomato sauce, or even a simple broth or light gravy for some varieties.

Time to Get Cooking!

If you’ve been following along with the earlier installments of this series, by now you know pretty much everything you need to prepare a pasta dish with delicious flavor and texture that rivals those served in Italy. From dos and don’ts for cooking pasta, utensils to employ when eating and appropriate pasta toppings to a little insight into the food traditions of Italy, we hope you’ve enjoyed this series and that it will help you up your game in Italian-style entertaining.