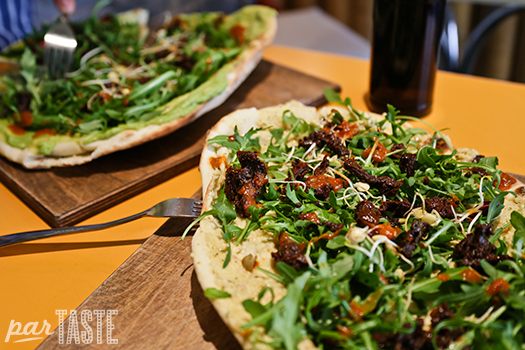 Berlin is well known for its eclectic restaurant scene and few places embody the melting-pot-nature of the city’s gastronomy like W-Der Imbiss. A self proclaimed “Indo-mexi-cal-ital” restaurant, the food at W-Der Imbiss effortlessly combines a mixture of influences from India, Mexico, California and Italy with more success than you could imagine. Despite whimsical dishes and mixing of ingredients, it’s clear that a lot of thought went into both the concept of the restaurant and its food. Take their signage for example: McDonald’s ubiquitous M is inverted to read as a W, although it’s no less recognizable, and der imbiss, the other part of the restaurant’s name, is a German phrase for the snack bar. The use of the golden arches might seem like a novelty at first, but when you realize that W-Der Imbiss turns the concept of fast food literally and figuratively on its head, you start to think that there might be something more to this place.

Food at W-Der Imbiss is ordered at the counter and you can choose a seat in the small interior or, if weather permits, head outside to their equally small terrace. When your order is ready, it will be announced over a speaker and this is where the similarities to a fast-food joint end, their food couldn’t be more different. If you didn’t know better, the seemingly random mix of tiki decor and menu items might lead you to believe that Canadian born chef and owner Gordon W. suffered from some sort of schizophrenia. One bite of their food and you’ll understand that whatever motivates the erratic combinations at W-Der Imbiss must be sheer genius. The star of the menu, naan pizza, like everything else at W-Der Imbiss, is fresh and home-made, available to eat in-house or order as take-away. The concept at W-Der Imbiss might seem complex, but the part that matters is simple: the food is made to order, it’s economical, it’s healthy, and it’s satisfying. What more could you want?